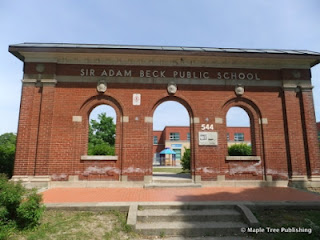 Alderwood’s not like the other emerging Toronto neighbourhoods. There’s big trees, big parks and generous lot sizes, but there’s no main street with clever new businesses to help it take off. The closest thing they have is Brown’s Line which is mostly functional. There is, however,  a great collection of shops at the bottom of the street where Brown’s Line ends and meets Lake Shore Avenue including an indie coffee shop, a  truly yummy empanada take-out, an authentic Mexican restaurant, and a fancy burger joint.
But Alderwood really isn’t about the commercial strip. It is more of a suburban part of Toronto that has much better access to the city than the newer suburbs further away. As an inner suburb, it has all the pluses of the burbs – nice, big yards, more space, detatched homes. Unlike other suburbs, you can easily get around to just about any where. The Gardiner and the 427, are easily accessible. And if you’re heading downtown, on transit, the GO station is not too far away.
Because it was once farmland, the steets are still named after farmer’s of the past where Farmer Brown became Brown’s Line and Farmer Horner became Horner Ave. With homes built in the 1950s, there is a large collection of bungalows. Now don’t let the word “bungalow” scare you off. Some of these bungalows are a decent size and have great layouts. The smaller, scrappier bungalows tend to be bought up by developers and replaced with a much larger, newer home.
Best of all, because it is an older suburb in South Etobicoke, it has a lot of mature trees in the neighbourood giving it a calm, leafy feel. If you’re a gardener, the soil is rich and less clay-ish than other parts of the city. Plants love it here. And if you’re lucky, you’ll live close to the Etobicoke Creek which is a great place to walk your dog in the ravine. You will be surprised by how much wildlife actually exists so close to the city.  Just be careful with your small dogs. There’s coyotes in the ravine!