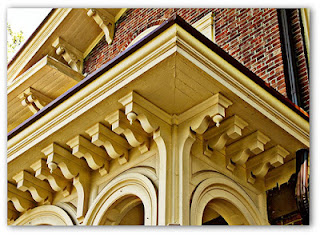 So, you would think that Toronto’s preservation efforts have been a smashing success.  But the truth is heritage preservation is a relatively new thing for this city. And really, no one really started caring about preserving much in Toronto until about the 1970s. Before then, it was out with the old and in with the new. Highways ruled supreme and no one had any idea who Jane Jacobs was.  Cabbagetown and the Distillery District were largely feral before the 1970s. So, they were just flat-out ignored. And strangely, that may have been the recipe to their current success.
Nowadays, things are very different. Cabbagetown has one of the most notorious and rabid heritage preservation group in the city. This group deservers their credit. I mean, Cabbagetown homes are a joy to look at. Of course, this group has also been known to be on fussy side. I have heard they (and the City) blocked some pretty exciting modern-design ideas because they didn’t look like the Victorian houses around them.
One of the latest Cabbagetown crusades has to do with the Toronto Community Housing Corp (TCHC) and all of the public housing they own in Cabbagetown. Before Cabbagetown transformed into its bastion of Victorian preservation, it was not exactly the best part of town. The city owned a great deal of the houses as public housing. Nowadays, this collection of City-owned houses, sprinkled in between all the reno’d Victorians, do stand out because they are essentially falling apart inside and out. And to fix them, especially to blend in nicely with their tarted-up Victorian counter-parts, would require a substantial pile of cash.  And we all know that the City does not have any money to fix them. Still, the locals are leaning on them to make sure that fixing them is a priority. Even without local pressure, it sure seems that these homes are in need of some attention if they are going to remain upright.
What surprises me is that the focus seems to be around the City providing an influx of money to upgrade these houses that are verging on substandard or have already passed that point. But I have a better idea. Sell em! Now, I know that doesn’t sound terribly surprising coming from a real estate salesperson, but I think doing so would benefit everyone. The buyers would likely be some one who wants in Cabbagetown to renovate and upgrade a house to their own liking, making the heritage group happy. The City saves money. In fact, it would make money off the sale of the house. Because there is a public housing shortage, the City can use this money to build more high-density or mixed-use housing for those who need public housing. A low-density house in Cabbagetown, or any where else for that matter,  is not exactly a cost-effective way to provide public housing, especially in a bastion of historic preservation. Let’s face it, preservation looks great, but it ain’t cheap.