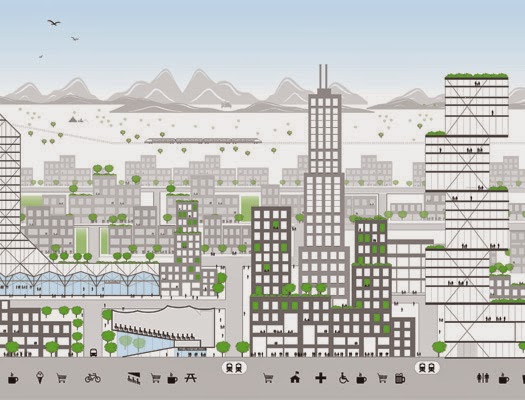 Do you remember the days when every one was concerned about suburban sprawl? From the 1960s up to the early 1990s, there was deep concern about poorly planned low density suburbs that sprawled away from the city requiring a whole lot of driving to be done. Many city suburbs were poorly planned, and they expanded out gobbling up farmland and natural habitats along the way.
These days, you don’t hear about sprawl very much. As as collective concern, it has vanished from our consciousness. Like holes in the ozone layer and the Cold War, you just don’t hear about it any more. But why not?
Well, many cities, like Toronto, have changed their official plan to protect farmland and the natural habitats around the city, or they have developed plans to revitalize the downtown with the idea that this will lead to a healthier, more prosperous city.   In 2006, Toronto changed its official plan so that no one could build any new development in the greenbelt that surrounds the GTA. They encouraged an intensification policy to end sprawl and better use up land in the city limits building up instead of out, when it comes to new development.
It’s a good idea because it is important to have farmland nearby to support a large city, even though we do import a lot of our food. And it creates more of a tax base so we, as a city, can collect more money to invest back in the city.
Like with suburban sprawl, some argue that poor planning can lead to vertical sprawl. They feel humans will be healthier and happier around nature which, in turn, will bring about a better connection to the world. Building a bunch of high rises will only make people feel alienated from their natural habitat.
For the most part, more intensification in cities has been seen in a positive light.

Urban gurus like American Vishaan Chakrabarti believes we are undergoing something he calls hyperdensity, where cities move from already dense places to very dense/complex cities like London. He defines hyperdensity as enough population to support subway lines. It’s the way we are heading in many cities around the world where most of the migration/immigration has been taking place.

For Chakrabarti, hyperdensity will work better than the low density suburbs, and generally produces a happier and prosperous community that is more economically productive and sustainable.
Cities are no longer seen as decaying and crime-ridden shells, but as a desirable places to live.
Still, like the worry of the suburban sprawl of the past, intensification requires great city planning, and I’m not sure the city of Toronto has kept up. If we are going to continue along the path to intensifying the city, we need to think of creating better transit, more parks and new schools along the way.
And what about the suburbs? Are they do be ignored? The truth is, suburbs are still being built outside of the greenbelt. And I can certainly understand their appeal. There is still a desire to live in a place where your house is cheaper and bigger and you can have a yard, even if you need to take on the killer commute to the city. So, they are not going to disappear and stop appealing to people, but they won’t be growing at the same rate they once were. In the old inner suburbs of Toronto, in places like Etobicoke, we are seeing a transformation from suburb to something between a suburb and a city. Just take a look on Queensway where you have trendy new condos like Cube down the street from Costco and Home Depot.  It’s a mix of every thing suburbs and the city offers: high rise condos, sidewalk cafes, subways, streetcars mixed with bungalows on huge lots, box stores, highways, malls and car-friendly streets. Some may see it as paradise – the best of both worlds, where others may see it as confused.
Whether you’re a city slicker or a suburban mini-van driver, we are going to grow as a region from all indications. And we can no longer afford to sprawl out. We just don’t have the resources to build the infrastructure for low density housing. So, intensification or hyperdensity, or whatever you would like to call it, is here to stay. But like suburban sprawl, growing vertical instead out horizontal requires the right kind of planning.