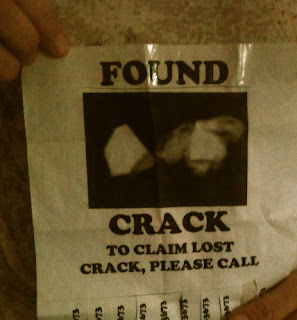 Just above you’ll see a photo from a recently discovered flyer found in the Sherbourne and Dundas area. I’m not sure whether I think it’s pretty clever or just plain sad. You can really take this notice one of two ways. It’s either legit where there is a concerned citizen out there who genuinely wants to return crack to his or her rightful owner, like you would a bank card or cell phone you found on the street, or more likely, it’s a local prankster who is making his or her thoughts known on just how common place drug use has become in this particular neighbourhood.
But what does this have to do with emerging neighbourhoods, you ask?
Well, a lot.  Many buyers I come across seem to think that if a Toronto neighbourhood is centrally located and is close to the downtown glitz and glam, it is destined to shake off its shady past, and emerge as a place where the prices of property will just keep going up and up, and the neighbourhood will inevitably improve.
And to a point, I agree. There is a certain momentum where more and more people want to live in the city. And this places pressure on well located neighbourhoods to improve as prices become out of reach in the more established downtown neighbourhoods. Even at Dundas and Sherbourne, a lot of the old Victorians have been renovated to look pretty fantastic.
But let’s not kid ourselves. Some hoods that have much bigger hurdles to clear than others. The  things that are pulling it down are just too powerful – crime, lack of community, and a disproportionately high concentration of poorly maintained public and private housing.  And of course crack. I wouldn’t go so far to say neighbourhoods like the one around Dundas and Sherbourne are doomed forever like rehab that just won’t work, but turning them around won’t be easy.