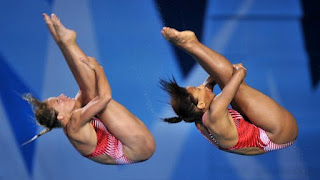 I love the Olympics, and when they’re on, I’ll pretty much watch any thing when I have the time. I even found myself watching the women’s synchronized diving this weekend where Canada snapped up their first medal.

What was so impressive about these synchronized divers are their ability to move exactly in step on the diving board, twist and turn at the same height in the air, and land at the same time with an almost equal splash. Really, I don’t know how they do it. Amazing.
The whole thing has led me to think about the concept of synchronicity and timing in real estate. Often buyers and sellers of Toronto look to the media for guidance on how to enter and exit the market. Right now, the media is awash with talk of the Toronto real estate market cooling off or even crashing. Of course, for ever article or TV segment announcing a crash, there is an equalizing article the next day saying every thing is just fine and dandy.
But I’m not here today to call out TV,  newspapers and some blogs on how they use real estate for more ratings and readers. I would, however, like to point out one assumption that gets made over and over again. And this assumption is all about synchronicity. Like the bronze medal divers, many articles and stories assume that condos and houses rise and fall in tandem, like two divers springing up and tumbling down together to the pool. But do they? Or, the bigger question, will they?
From a macro perspective, the short answer is yes. If there was a sudden rise in unemployment, for example, or a huge spike in interest rates, houses and condos would both be hit hard and would likely slow down or even fall in value.  The change in value would be different, though, depending on where you live in the city and just want kind of condo or house you live in.  To see the effects from the macro perspective, all we have to do is look south the the U.S. where the entire country lost value in their homes, albeit the effect varied widely from state to state.
From a more local perspective, I think condos and houses do not move in tandem at all. We would certainly not receive a bronze medal for synchronicity, that’s for sure. As I’ve mentioned in many previous blogs, there are very few homes that are currently under construction in the GTA, but our population is increasing. So, there are more homebuyers, but very few houses being built. A pretty good recipe for an increase in the value of houses over the long term based on simple supply and demand data. As for condos, there many condos being built.  And the really, there needs to be. There is a huge rental demand and a huge buyer demand. Supply is keeping up with demand, though some say exceeding it. So, on local level, houses and condos are not moving in sync at all. Houses are set up to increase more in value than condos.
Now, this is a  HUGE generalization. There are better condos than house and better condo locations then house locations. There are certain condos that I would say are better investments than houses. But, all in all, condos do not increase in value as much as houses do across the GTA.
Does that mean every one should rush out and buy a house? Absolutely not! Some houses require a lot of renovations off the top that could really put a dent in your budget, and houses require a lot more labour – namely shoveling snow, cutting grass and cleaning out your eavestroughs.  You really have to dig deep and figure out if you’re a house person or a condo person. I mean, in the end, you have to live there or be the landlord. I would never buy a house if you’re a condo person. I would be the right condo!