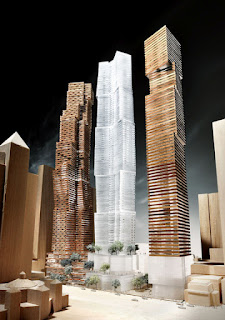 Okay, I’ll say it. I love them! Monster-sized condos are not usually my thing, but I like these three monsters, quite a bit. Love can be like that some times…

There’s been a lot of crabby reviews and editorials since the proposed development, three 80 story towers along King West in the Entertainment District with a whopping 2600 units in total. As you likely have heard, Frank Gehry has teamed up with David Mirvish to offer one of the most ambitious projects in this city’s history, making the Trump Tower seem wimpy and yawn-worthy and the Shangra La seem Shangra Blah, at least from a architectural perspective.

The critics have some good points though. The traffic will be insane, during and after construction. And the building of these towers, like all other condos on earth, will take way longer to construct than the developers say. To those traffic worries, I couldn’t agree more. BUT traffic in this area is already a bit of a nightmare. So a better solution, I think,  is to build a larger subway system. I’m not sure where the money will come from. Maybe the developer could foot the cost of some of this line? I know the idea of a relief subway line has been thrown around in the past few years, just south of this proposed development.  That would certainly help reduce some of the worries of traffic. They don’t call it  the Downtown Relief Line for nothing.

Critic also worry about the loss of one of our theatres, one that would need to be torn down in order for this project to be built. Though the Princess of Wales Threatre will have to go, the arts will not be neglected. There will be a 60,000 square foot art gallery in its place. And the truth is, The Princess of Wales Theatre is not full of patrons at the moment. This city, according to people who go to theatres, has too many of them. Shows don’t run year after year like they were expected. Instead, musicals run for a shorter period and there are smaller shows that attract a larger part of the the theatre-going audience.

But enough with the naysayers. Here’s why I think it should get built:

1. Frank Gehry has a pretty good track record. With just one Gehry museum in Balboa, Spain, he put a rinky dinky backwaters Spanish city on the map. And even for those Alpha cities, he’s left his mark. There’s the Disney Centre in LA. 8 Spruce Street in NYC. Both have added to the cities they were built.

2. Toronto needs some pizzazz in the achetecture department. Gehry is right. Toronto’s architecture is “mostly bland”. So, why not kick it up a notch?  To our credit, it’s not our fault. Toronto burst in size in the 60s and 70s. We grow in a era of ugly. Now is our chance to be a little adventurous.

3. We can create a neighourhood juggernaut. King West is hardly an emerging neighbourhood. I’d say it’s clearly an established one.  In many ways, it’s taken over as the new centre of the city from Yorkville, snatching TIFF right out from under it, plus the already huge theatre scene that exists there. Even though it’s a neighbourhood on top, this Gehry project will inject King West with even more cultural cache. Yes, it will be more crowded, but London’s crowded and so is New York and so is Hong Kong.

I do have one worry though, different from the critics. I worry that a wishy washy compromise could happen. The City of Toronto may get fussy and water down the vision. Maybe the project will simply become too expensive and corners will need to get cut.  Look at the ROM. Way more interesting on paper until they ran short of money when one of the backers questioned the design. Then came the final product with cheaper materials and a simpler, less inspired design.

Hopefully they will learn from the mistakes of the ROM. And maybe Toronto will learn from a city that has taken on some daring architecture. And this time, I’m not talking about London or New York. All you have to do is turn your head west to see the Marilyn Monroe Tower in Mississauga, a design that rivals and even exceeds the best of Toronto buildings. In fact, the success of the Marilyn Monroe tower was so big, Mississauga decided to build another one.