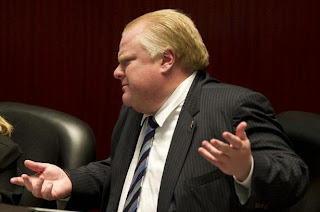 I didn’t vote for Rob Ford. I don’t think he has the chops to run a big, complicated city that’s in a constant state of transformation. I do, however, believe many voters in Toronto had grown so cynical and hopeless about municipal politics around the time of his election that they decided to drop a bomb on the status quo, and go for some thing completely different. Sure, there wasn’t much thought about what that “something different” may turn out to be, or how Rob Ford would run the city. Regardless, people wanted change in Toronto City Hall, and they got it.

Of course, the success of Ford’s job as mayor has proven to be fairly disasterous so far, though entertaining at times. Who didn’t enjoy the story of Ford’s 911 calls when the fictional TV comic character, Marge Delunty, came knocking at his door? But I’m not here to talk about his gaffs or his inability to stop a gravy train, or if there is even one coming into the station.  But I do support one of Ford’s election promises, and that’s to ditch the land transfer tax here in Toronto.

The Toronto Star recently published an article expressing that Rob Ford is wrong in wanting to ditch the land transfer tax. The writer argues that land transfer tax has been a golden goose. It has injected hundreds of millions of dollars into the city’s anemic accounts allowing for Toronto to grow a little autonomy. I certainly don’t disagree with that. I believe Toronto should have a lot more power that it currently does. The Feds and the Province  have downloaded a lot of their costs on to us, and quite frankly, we really need to fix our infrastructure for this city, if we want to make this a livable place. Simply put, we don’t have the funds to pay for them, even if some of the gravy can be cut.

So, let’s get some perspective here. I agree, the city needs more money and a revenue stream and more autonomy. After all, it is the 6th largest government in Canada, but it doesn’t have the kind of power you would expect considering its size.

In addition, the land transfer tax places the burden of raising funds for the city on the backs of buyers.  I don’t believe this benefits the city of Toronto. It is a inconsistent tax that is disproportionately thrown at buyers at a time when they are paying lawyers, and home inspectors, and renovators and movers.  Also, if the economy ever goes south in this city or if there is a steep fall-off of in real estate transactions, then this revenue stream will slow to a trickle and  the city will make a lot less money. It does not provide a consistent level of revenue for a city to build budgets around.

I think, if the city of Toronto wants to keep the golden goose and keep the money coming in, they need to increase their property taxes. I know that won’t be popular, but if we do need the money, and the revenue stream, then raising property taxes would spread out the burden more widely with all of the city’s property owners. Plus, if there is a problem with the economy, the city still gets their taxes. It’s a consistent way of generating money for the city. After all, according to a Toronto Star survey, Toronto pays some of the lowest property taxes in Ontario.

Now,  I don’t think any of this is going to happen. There will be no raising of the property tax rates, and Rob Ford will not get rid of the land transfer tax as promised. But I do think he’s on to some thing here. I don’t agree with this guy very often, but in this case, I support Rob Ford!