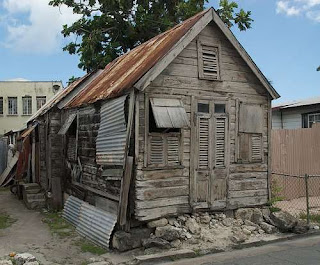 Renovating and flipping has been a Toronto tradition for quite some time, particularly with older houses. It usually follows a path like this: A buyer comes along and purchases a dumpy house that needs to be completely gutted and updated. And by updated, I mean seriously updated – new wiring, new roof, new heating system, proper insulation, new windows, lots of permits and often some structural changes as well. Then, after essentially starting from scratch and setting up the behind-the-walls improvements, you add the pretty – a knock-out kitchen and washroom, new wood floors, pot lights, a new deck or flagstone patio, more closets, and a fresh and modern look.

Characteristically, these dumps have been largely neglected since the 1890s to the 1960s.  Because these dumps looks terrible, many believe they will generally be ignored, leading to a discount price.  The dump becomes the Cinderella that every one wants to dance with the ball. And by “dance at the ball” I mean sell at a much higher price than it was bought and renovated for. For a long time, many flippers made money this way. They would buy cheap, reno and spend money, then sell for much more. And it often worked.

But now, it doesn’t work all the time. And it’s not because the prices of houses are slipping, but because the prices of dumps in key Toronto neighbourhoods are rising. Dumps used to cost very little because no one wanted to go near them except some brave contractors. The fear of fixing it up was just too much for 99% of the people. Now,  houses in many neighbourhoods are in such demand that the dumps are being purchased close to the price of a finished home. In fact, there seems to be some appeal in the total dump. There are now a group of buyers who prefer to buy a house they can completely gut so they can start over and build their dream home to the exact specifications they want. Sometimes it includes a gas burning stove, heated floors in the washroom or enough gadgets to intimidate James Bond. The fact is, those buyers who want an ideal home now have more confidence in buying dumps. They don’t see it as ugly and run-down, which it certainly can be, but as a kind of tabula rasa, some thing blank where they can have a fresh start. It is not so much about selling the house once they are finished, but it’s about enjoying the house once they have created it.

Flippers who have renovated homes feel a little shocked that dumps are selling closer to where their finished homes sell. Shouldn’t a decked out house sell for more? Well, in a great neighbourhood, I would say: “Not always.”

So what can we learn from this current state of Toronto real estate?

1. If you are selling a house that is a dump, I believe it would be wise not to renovate it.  I’m not talking about any house, but one that would require extensive work. In some homes that are dated, or a little dumpy, it may be a good idea to invest in some renovation.  In general, I would just discourage someone from completely overhauling their home.

2. If you are a buyer, don’t be afraid of the renovated home. Really amazing renos in in-demand neighbourhoods will often sell for a lot of money and generate a great deal of interest, but some times a few slip by and don’t sell off in a frenzy of a bidding war. If you factor in the renos in some places, you may be paying less to buy a finished home than one that requires a renovation once you factor in the cost of those renovations.

3. There is a place between the dump and the beautifully, fully decked-out reno’d house that may still generate bargains. And that’s the 80s reno. As a buyer or investor, the wiring is usually updated, the walls are drywall and the insulation are adequit, and if you’re lucky, the basement has been dug up and waterproofed to give you some better height and a useable place. Maybe the kitchen is dated, the dark green and dusty rose combo is not giving you the wow factor. These places don’t show well, but underneath all that 80s-ness, you don’t need to spend as much money on the big ticket items like wiring and plumbing.

Of course, it all really comes down to a specific property.  I would consider this more of a trend than a hard and fast rule. Sometimes it comes down to timing, luck and the right real estate salesperson.