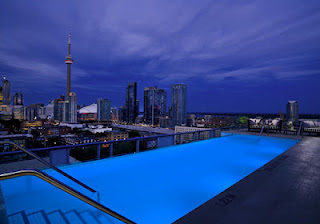 The other day I had an open house on King West. It was a pretty stylish penthouse suite in a typical condo building for the area. What surprised me the most about this particular open house was the number of people coming through that were heading down from Yorkville.  In the past few years, I have heard many times that King West is fast becoming the new Yorkville. I wasn’t crazy about the comparison, and quite frankly King West isn’t the new any thing, it’s just King West.

But clearly, after my weekend open house, I learned that many people love to compare the two neighbourhoods. Why? Well, the biggest reason I see has to do with the Toronto International Film Festival.  Once centred around the fancy streets and cafes of Yorkville, this juggernaut of a festival has moved it’s epicentre to the TIFF lightbox on King West.  And those serious movie-goers and star watchers like to be close to the action. Even if you don’t go see any film at TIFF, many still love to claim it as their neighbourhood.

The second most glaring comparison has to do with the pedestrian-friendly, walkable streets of Yorkville. And now, in the King West area, we have the proposed John Street promenade that  would see John Street a walkers-only street. There are some pretty big plans to make John Street a cultural hub.

Then there’s the high end factor. Though Prada has not moved into King West yet, it does have it’s share of high end, boutique stuff from the Thompson Hotel to Gotstyle. There is even rumours of a proposed  Whole Food grocery chain coming to the neighbourhood on the main floor of the Minto. Just a reminder that Yorkville was the first area of Toronto to receive a Whole Foods.

Now there are some differences as well. King Street is busier, generally younger and closer to the action -whether you want the action or not. The streets are not quiet on a weekend night in the summer, but the theatre is a walk away.

So, now I’m not surprised people make the comparison. Like Yorkville moved from hippi hangout to richie rich, I believe King West will likely appreciate and ascend to high-end fashion destination faster than other parts of the city. So, not a bad place to invest.