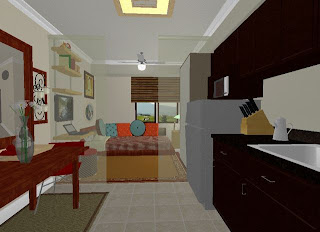 This past week, I toured a few properties with a new client from Montreal. After spending over a decade living in Canada’s second largest city, she decided it was time to call our country’s largest city home.  As with many incoming Montrealers, you have to manage their disappointment somewhat. Toronto is not New York or Tokyo, but compared to Montreal, it might as well be. Living in Montreal is easy – beautiful homes and condos for a fraction of the price. Montrealers often live, whether they rent or own, in stylish conversion lofts in very central parts of the city. At a similar price point in Toronto, they will not get the same space, sexy location, or level of fanciness as they had in old Montreal. It’s a harsh reality that most of us already know: Toronto is more pricey, and some adjustment in moving here has to be made.

This led my buyer to make some sacrifices, sacrifices many of us make, even if we’re not coming from Montreal. Do we sacrifice space to live in a great neighbhourhood? Can you be happy with a murphy bed in a 350sq ft condo in one of the best addresses in Yorkville? Or would you prefer to be further from the city core in a larger condo unit or house where you have the space, but you you’re practically back in Montreal in terms of the time it will take to drive or take transit into the city.

It’s a tough sacrifice, and it’s usually a personal one. Some people are never home and need the city to be at their doorstep. They can’t bare to walk more than 10 minutes to their downtown office. In their case, size does not matter. Location does. Some need space – a big, private yard, a lot of rooms for kids and visitors and storage. A small box in the middle of the city to live in would be prison.

Chances are these personal preference will guide you for the most part,  but if you could set the personal stuff aside, there are some shrewd business choices you can make. First, you can try to have a little of both. A little more size, but only a small distance from the downtown. A condo or house in an emerging neighbourhood will often lead to a better return down the road in 5 to 10 years in comparison with other neighbourhoods. Why? Because the neighbourhood is still changing. If things are changing for the better, that change will likely continue. 10 years ago you would never find a New York Times article raving about Leslieville or the Junction as you would today. They were both run-down, drab places that looked that they would never make it. Even Yorkville in the 60s was a haven for hippies and the counter culture movement, not the haute couture movement of today.

But back to my Montreal buyer. I think she has determined that she’s definitely a city girl, though ideally she  would like to buy in an established Toronto neighbourhood with an emerging neighbourhood budget. Ahh, those Montrealers. They dare to dream!