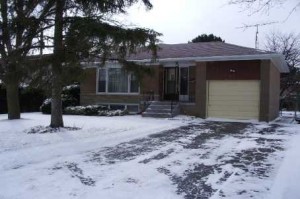 I think my favourite tag line for a Toronto real estate news story this month has to be:

Toronto Bungalow Sells for $421,800 Over Asking Price in Market’s “New Reality”
New Reality? Really? This tag line suggests every one is going to start bidding $400K over the asking price in order to get a bland, beige bungalow in North Toronto. Truth be told, the house was listed for about $150,000 under the comparable sales in the neighbourhood. So, it was not listed at market value. Not even close.  This house in Willowdale was bought for $1,180,800, and was purchased by a university student from China. And who could blame so many Chinese from purchasing here. Compared to the rest of the world, Toronto seems pretty stable in the real estate department. And cheap. Downtown Toronto condo’s can sell for $800 per sq foot where in Beijing the price is $2000 per square foot. And in Hong Kong it’s $4000.  So, you can see how some foreign investors would find Toronto appealing. And it’s not just the Chinese who are finding Toronto to be a deal. The Indian, Russian, European and Middle Eastern investors are also showing some interest here. In Canada, we think Toronto is extremely overprices, but it’s all relative. Pricey compared to many other Canadian and American cities, but not Switzerland, parts of China and parts of Australia.
Of course from a hometown perspective, overseas investment in real estate can certainly effect the local market. Unlike the U.S. , the Canadian government does not currently keep comprehensive records of foreign investment in real estate.  So what does this mean? Well, we don’t really have a good idea of whose investing in our local real estate market and how much. The  worry is that too much offshore investment can drive up the prices to crazy heights.  Since we don’t keep any records, we don’t really have a good idea if this is even happening, and if it is, how much is it effecting prices.  I know that the bungalow that sold for over $421, 800 over asking is an extreme example. It is very unusual. It is definitely not the “new reality”.
If this is a concern,  it is my understanding that most overseas  investors  focus on downtown and North York. Areas like Leslieville or Mimico are not considered areas where you’ll see heavy investment by overseas investors. Condos are also more likely to be places to be bought as investment because they can be managed more easily from overseas.
Now don’t get me wrong. The houses in many emerging neigbhourhoods are showing very strong sales right now, well above the Toronto average, but if you’re worried about the influence of overseas investments in most emerging neighbourhoods causing the pricing to go off kilter,  I think you shouldn’st worry so much.