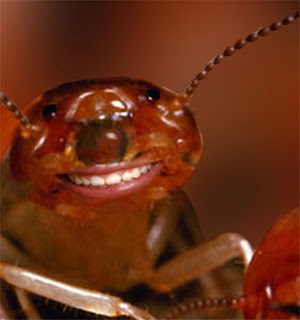 If they were not such a threat to my clients and their homes, I believe I would respect the mighty termite. They are industrious workers that never stop, focusing on their munching task a full 24 hour each day. And though they are not native to anywhere in Canada, except a small portion of southern British Columbia, they have settled into every province across Canada hitching a ride on shipping cargos from the all over the United States. They are pioneering. They work as a team. And in the right light, they are kinda cute. Well, maybe not conventionally cute, but I’ve seen uglier insects!

Unfortunately, we humans and termites cannot be such good friends. According to Pest Control Canada, termites cause more damage to our property than tornadoes, hail storms, windstorms and hurricanes combined. They’re have been recorded reports of termites in Ontario since the 1920s, and in Toronto since the 1930s. Though they have traditionally favoured the neighbourhoods near the ports where the termites and their families first arrived, they can  now be found all over the GTA.

But how were they able to expand so much in Canada? Well, for starters, they are tough to see and move around without us humans even knowing. They are silent nibblers. They are hidden behind your walls and under your house. If you don’t know what you are looking for, ideally with a qualified home inspector, you may never know how at home they are in your house.

Termites are unassuming insects. They are less brazen than the mosquito and not nearly as dramatic as the cockroach.  And since they want your home and not you or your food supply, they stay out of your way and often go undetected.

Don’t believe me? Well, let me tell you about a recent experience I had.  Not too long ago I took on a beautiful listing in an established neighbourhood that is known for having termites. The thing is, this home was less than five years old, and it had a concrete foundation with absolutely no wood-to-soil contact. Nothing beside concrete was in contact with the soil.  My seller and I were fairly confident that this home was termite-free, but thought it wise to check for them with an inspector.  And as it turns out, they were making their way into the home, moving up the concrete in some of the typical fine cracks that develop when the house settles.

Lucky for us, they did not move more that a foot into the house and the property was not damaged or compromised. Termites are the turtles of the insect world. They are VERY slow moving. It will take  several years  for them to do any real damage to homes. Since this house was fairly new, the termites could not really travel very far. It was something we disclosed to any potential buyers, and we had the property treated to remove the termites from the house.

I asked the termite inspector why termites are appearing in new homes, and he told me this: Before the city of Toronto amalgamated, the old city of Toronto made it mandatory for all new builders to treat a site for termites wherever they built new. Once the amalgamation took place, I was told this policy was removed. Builders were no longer expected to treat for termites in the new almagamated Toronto. So, when a site that previously had termites has been knocked down, then the termites may be waiting in the ground, and can easily travel into a new property, even with concrete foundation.

So, now that I have scared you that termites can show up in properties where you might not expect them to be, let me give you the good news. If you have termites, you don’t necessarily have to freak out.  Many homes have had termites, that have subsequently been treated, and are now fine. It all depends how long you have had the termites and how much damage they have caused. The presence of the insects themselves is treatable. You can get rid of them, but you may need to have an update treatment every year. Another piece of good news:   There is a new treatment coming in Canada next year that is even better than the current one. Both of them will get rid of the termites. The current treatment deters termites from staying or coming into your home, but requires update treatments each year. The new treatment will kill the termites in and near your home, and future treatments will not be necessary.

Ultimately, the thing to remember:  If you are buying or selling a home, it may be wise to have a termite inspector go through your house to see if you have any signs of termites.  At the very least, you may want to contact the local pest control company to see if they have treated anywhere near where you plan to buy or sell, though this is no guarantee.

In most cases, I find, if the termites are caught early, you are fine. Because they don’t bother us directly like say, the pesky bed bug, we are not inclined to hunt them down. However, if you want to be sure your home is not a buffet for a colony of termites, you may want to have a specialist in to have a have a look.