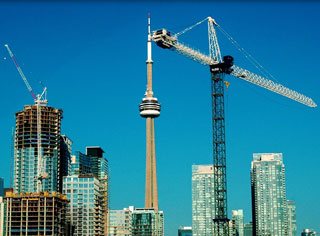 Toronto loves a good high rise. We’re a city whose identity is very much wrapped up in it’s own ever-expanding skyline. In fact, some of the most visually exciting proposed projects, like the Gehry proposal on King St. West, are high rises, higher and more dynamic than ever. But there is a change going on in Toronto’s condoland. And no, it’s not a earth-shattering crash, but things are shifting. And it looks like the number of high rises that will be built in the future may be far fewer in number than we have seen.

As we have heard, there has been an incredible demand for condo units in this city in the past 15 years. And since the recession of 2008, Toronto is one of the few major city’s in the world that seemed to have a stable housing market. So, foreign investors came here to purchased a condo for themselves or as an investment. Toronto even had the distinction of having more condo’s built in one year than any where else in North America. So, with that demand came a huge increase in the number of condos going up in this city.

The foreign investors came from Asia, Russia and the Middle East, to name a few, but now they are not coming here as much. Other cities around the world are rebounding from a worst recession than Toronto experienced. So these days Miami and London are becoming great places to invest again because the values of their properties have fallen and are now turning a corner. Toronto may seem stable but we’re not bargain basement prices after a massive market correction.

It appears as if the fuel that fueled the condo boom in this city is running dry though. It would seem like a guarateed recipe for a crash, but a real crash would have foreign investors trying to sell of the condos they have bought, and that does not seem to be the case right right now.

The thing is, there is another big shift happening in Toronto. There is a huge rental demand.  Very few rental units are being built, and many condos are picking up the slack of that demand. So luckily, many of these condos that are bought by investors, foreign or otherwise, can be rented out. And rents have gone up considerably in the past few years.

This drop off in foreign demand, though, will change how condos are built in the future. First, there will simply be less demand. So, fewer condos will be built. We can’t have the distinction of having the most condos built on the continent every year. And future demand will likely focus more on meeting the demands of local buyers and investors. So, building high rise condos may not be necessary, since there will be a smaller demand for condos.

Secondly, the Official Plan of the city would like us to keep new properties along most major commercial streets designated as “avenues” to be between 4 to 8 stories. There are exceptions to this rule. You can, for example, build much higher in certain parts of downtown. Still, when most streets are designated to have 4 – 8 stories built on them, that does limit your options.

So, without the demand from foreign investors and the Official Plan of the city keeping the number of stories to a minimum, we will see a lot fewer high rises and a lot more midrises. Toronto will continue to densify, but not at the rate we have been seeing. Maybe it’s not so much the end of the high rise. They’ll keep coming, albeit at a slower rate, but it is the rise of the Midrise! Sure they don’t add much to the skyline, but they do fit in very well with already existing neighbourhoods and fit the scale of the buildings around them.