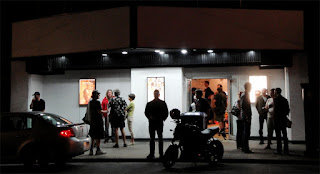 I think in most Torontonians’ minds, when I say Gerrard St. East, they think of Little India (a.k.a. India Bizaar), east of Coxwell. If you search a Toronto travel guide or google “Gerrard East Toronto” then up pops this distinct and beloved part of the city with South Asian flare, saris for sale and tasty food.

But that’s not the Gerrard East I want to mention today. Today, I want to take a good look at Gerrard East between Login and Jones, that mostly sad commercial strip with crusty-looking shops, neglected buildings and poorly maintained every thing. For a long time, it felt like a hopeless drag that sharply contrasted the radical transformation not too far south on Queen East, the nerve centre of Leslieville, the ground zero of every thing cool, new and culinary in East Toronto.

It looked like this Gerrard St. East strip would never turn around, but once Leslieville on Queen East started to become a tough place to open a business on a modest budget, daring business owners looked a little further afield to Gerrard Street East.

And though the change is early, you can see that this area is starting to gain some momentum.  There has been a series of indie coffeeshops to open up including Grinder, not to mention the sign of all thing gentrifying (for better or for worst), Starbucks.  Each new strip in Toronto usually has a gourmet  burger joint and Gerrard East is no exception with the Great Burger Kitchen. Then there’s the fancy new restaurants like the very cool Hammersmith’s and the Playpen near Carlaw, a place whose aim is to recreate the playboy aura of Las Vegas in the 70s. I think it’s worth the visit, just to peer inside. And one of the most interesting new developments has to be the reclaiming of the Gerrard Cinema by the locals. It has now become the Projection Booth, a new rep cinema. It’s an unusual and surprising development. If you hear of any news of a rep cinema in Toronto, it usually has to do with one shutting down.

In my opinion, this street is going to look very different in 10 -15 years. You won’t even recognize it. For now, you can drive down this portion of Gerrard, and you will still see a lot of the dreariness. But take a mental before photo because I think the after photo is going to be pretty impressive.