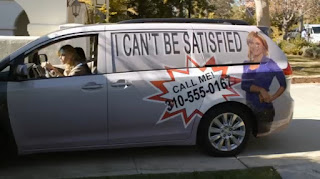 Alas! It’s Spring!  Flowers are bursting! Birds are tweeting!  And your mailbox is jam packed with real estate flyers. Not that real estate flyers are the sole domain of this season, but they really do seem to increase in volume during warming months, when sales volumes tend to peak.

Some neighbourhoods will receive more than others. If you’re in Toronto, though, you’re pretty much guaranteed to receive a lot.

My neighbourhood gets its fair share of flyers, including my very own! As far as my flyers are concerned, I do try to include some relevant information that the reader will find useful, and I write every thing for it myself. But I think I’m in the minority here. I’m pretty sure most agents use a marketing company that writes their articles and provides the stats. Nothing necessarily wrong with that. Some of the stats and articles are very well done. But I do think there is a general idea out there that agents write their own opinion pieces and stats on their flyers.

The one thing that gets under my skin a little, though, are the salespersons who claim to be the top 1%. There are far too many flyers going out with this claim. Mathematically, it just doesn’t add up. But I guess you can be the top 1 % in Canada, at your brokerage, or #1 at your desk.

Then there’s the awards. Such and such won the chairman award, the president’s award, the gold star award. Good for you! Agents, you should be proud, but unless you’re going to tell me what the award means, then don’t bother to advertise with it.

Then there are those who really miss the mark. Take, for example,  the real estate salesperson from Mississauga who sent out a flyer a few weeks ago promoting that “traditional family is the best for the future of the kids” in his ad. A number of residents who received the flyer complained. And rightly so, in this day and age.  Regardless of his views, what really confuses me is why someone would think this would encourage anyone to sell their house with him. On top of that, you would think his manager, who should have approved all advertising, would have red flagged that one for its less than friendly message.  I’m left scratching my head…

At the end of the day, most folks don’t pay attention to real estate flyers.  We all know that most of them that reach someone’s mailbox goes straight into the recycling. And, providing your advertising isn’t very offensive, it doesn’t matter what your flyer says. It matters that after many years, when that one person decides to sell his or her house, he or she may wonder: Who is it that agent that sells homes in our neighbourhood again? And then, that real estate agent who has been filling their recycling for the past several years may cross their mind  -that is, if they don’t already know a salesperson already. And that’s why we do it.

Still, I can’t help it. I critique every thing that comes to my door as if I was not a salesperson, and I am just a homeowner.  I do take the time to read it. So, if you’re going to be sending me stuff, make it worth my while! Inform me or make me laugh. It doesn’t have to be elaborate or even your own. Just make it worth the time, even if it’s for only a minute out of my day.