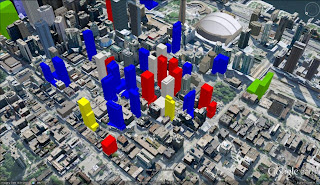 Lately, Toronto appears to be more and more like a teenager. Not because it has a few blemishes and is relatively young compared to the older cities in Europe, but because, in just a few short years, it has grown so much taller than than it used to be.

By 2015, Toronto will  have 44 high rises exceeding 150 meters.  To put that in perspective: That’s over three times more than the mere 13 high rises we had in 2005. Though I think builders will shift back to more midsize condos 5 to 10 years in the future, condo projects recently done or slated to be done in the next few years will change this city in a fundamental way.

And this will be reflected in how we have and will buy property in Toronto. It is not just evident in our reaching skyline, but also in the sales figures. Only ten years ago, 25% of the sales were in highrises. Last year 62% of new homes sold were high rises.
In many ways, it’s a smart way to grow the city by making it more sustainable, growing up, instead of  growing out into sprawling suburbs. It makes for a more walkable city with more density that brings in better commercial strips to do that walking with more stores and better selection.
On the downside, the city of Toronto has not changed its infrastructure at all to accomodate this massive shift in how we live. We have been in a state of complete paralysis around highways and public transport, lacking the leadership from all stripes of government to get any big project even started. We all know the Gardiner is reaching the end of it’s shelf life. Plans to bury it or replace have been expressed, but that’s about as far as it gets with the exception of a few patch jobs.
Whatever the solution, the car’s future in this city is not bright. So, for some, owning a car can be more of a liability,especially downtown. In fact, you will find a lot more condos sold without parking these days for that very reason. If you are truly a downtown animal, you may not feel you need it. Though I personally cannot imagine life without a car, I some times think there has to be a better way to get across this city.
So, what about public transit? Well, in Toronto, I think planning for public transit has been impressive, though the implementing of any thing large scale has gone the way of the Gardiner. Few Torontonians would certainly agree that a better transit system wouldn’t hurt. I know it’s not cheap, but this city is lacking in a transit system suitable for a city its size. Madrid, roughly the same size as Toronto, has 293 kilometers of subway lines serving 272 stations. Toronto has 70 kilometers serving 60 stations. Do you see where I’m going here? Toronto should have four times the amount of underground rapid transit as it has now.
I know it’s easy to say we should have better roads and better transit, but at the end of the day, someone has to pay for it, right? Though I do think road tolls would be a good way to generate revenue for people using the highways around Toronto,  I’m not here to suggest a budget or any funding streams. I know that’s really where the tough decisions have to be made, but really, if we are going to become taller and denser, and we still want to be able to move around the city with relative ease, then its time to take on those big projects, like public transit and the Gardiner, and get this city ready for the inevitable.