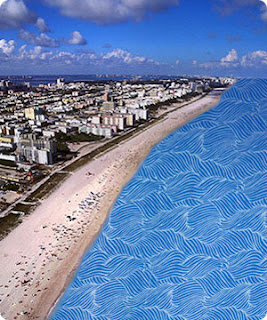 Never would I have thought any one would compare Toronto to Miami, but alas it is now happened. in fact, I’ve read a few articles in the past week or two comparing these two seemingly incomparable cities.

Is it the tropical temperatures? The miles and miles of beaches? The art deco? Hmmm… not exactly.

The reason: new condos. Toronto will have some thing like 16 000 new condo units hit the market next year. Some like to compare this to Miami, who reached similar numbers in it’s heyday.

Of course, Miami is not in its heyday any more.  Far from it. And some like to think Toronto will go the same way of the dodo bird (re: Miami).

It is true that Toronto does have a lot of new condos in the works and does have a certain amount of foreign investment in condo units now like Miami had 5 or 6 years ago, but there are some huge differences that cannot be ignored. Most notably: Toronto’s market is not linked to a subprime mortgage crisis in the United States. And secondly, our four full seasons keeps Toronto out of the same league as Miami as far as vacation destinations go. Miami’s crashing market probably had a lot to do with the temporary vacationers and not people who actually live/rent in the city. I have a feeling there are some secondary vacation homes in the Toronto market, but nothing compared to Miami. And lastly, Toronto has a much more diversified economy than Miami. Miami has oranges and  beaches. Toronto has entertainment, health technology, and it’s the financial centre of Canada.  So, if people stop visiting, the city isn’t going to have it’s housing market plummet.