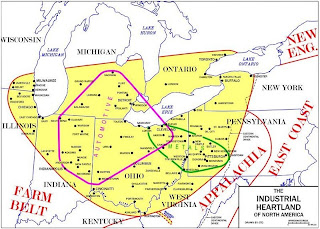 The other day someone asked me if I would invest in Detroit real estate. Hmmmm…. Let me think for a moment…Ah, no. But not everyone thinks like me. There are many Canadian investors who are buying up Detroit real estate at bargain prices in the hopes that Windor’s American Cousin across the river will come back after free falling for half of a century. Hopefully, with this town’s declaration of bankruptcy, the big “reset” button has been pressed, and it works this time.

In a way, Toronto has changed in the exact opposite way of Detroit. In 1950, Detroit topped 1.8 million in its population, where Toronto was just over 1.1million. That was the year that the Detroit population peaked. It’s metro area is now a mere 700,000 today where Toronto has reached over 2.6 million (over 6 million if you count the GTA).  It’s a remarkable turnaround for both cities.
In some ways, they share a common history. Both are, historically speaking, “rust belt cities” that prospered when manufacturing contributed much more to the wealth of the U.S. and Canada. Still, each city could not rely so heavily on manufacturing to carry the city into the future. And like many cities at the time, both Toronto and Detroit have seen some flight to the suburbs in the 70s as well, though Detroit would suffer much more from it.
Rust belt cities have been largely unsuccessful with the slow down of manufacturing sector in the American economy. Some have gone into a long decline – Cleveland, Detroit, Baltimore, Buffalo, and a few have rebounded like Pittsburg and Chicago. Aside from Toronto, that is currently at is highest population to date, American rust belt cities have suffered a decline in population, even in successful cities like Pittsburg and Chicago.  Some argue that Canada  faired better because its population did not have a Sun Belt to draw them away.  Others will say that the Toronto area has managed to diversity its economy better and keep its manufacturing base strong.
In many ways, neigbhourhoods in Toronto function like a rustbelt city. Some are rebounding winners and some are in decline no matter what you do. Around the 1960s and 70s, many Toronto neighbourhoods began to go into decline as many moved to the more properous and, at the time, more attractive living in the suburbs. And after some decline, some city neighbourhoods emerged at a future date when the residents can find a way out of their decline.
Let’s take the Beach neighbourhood for example. In the early part of the 1900s, the Beaches of Toronto were all the rage. You can access the beach easily and there was a great advantage to being near one.  There was no air conditioning back then. So, on those hot summer days, people would head to the beach in droves. No one went to the cottage to swim – it would take much longer to get to Muskoka back then. Then of course, the highways improved and air conditioning arrived, and the beaches of Toronto went the way of the steam powered trains and powdered wigs. But not long after, the hippies and artists started to buy up the housing near the beach, the city realized that the beach was a good thing, and then the turnaround began. Now, the beach is insanely busy in the summer and one of Toronto’s top established neighbourhoods.
In Parkdale, we see another Toronto neighbourhood that went into decline due, in part,  to the end of the beach. At one time, Parkdale was for the wealthy set, with stylish city mansions and detailed Victorian architecture. A walk to the popular Sunnyside Beach was easy, but then along came the Gardiner to cut off access to te beach (on top of air conditioning, the flight to the suburbs and eas access cottage country) and Sunnyside Beach’s glory days were done. Parkdale went into a deep decline, Detroit style. And still, Parkdale was able to turn it around to the point where many in Parkdale would like to stop the turnaround from happening so quickly. Those huge stately homes that were once a steal, are now not as cheap as they once were, despite Parkdale’s gritty feel.
Now, I don’t want to give the impression that every part of Toronto is going to rebound into an emerging neighbourhood. Many parts of the city, further from the core will decline in the future due to poor urban planning and other urban woes.
Some neighbourhoods are still undecided. Take Weston, for example. This area has been called “the rustbelt of Toronto”.  It is like a little Cleveland or Detroit or Pittsburg right in the city. Like those rustbelt cities, the Weston neighbourhood was once largely a manufacturing area. It was a close-knit, working class neighbourhood with its own Santa Clause parade (which it still has), but then the factories where many of the locals were employed shut down, unemployment shot up and the decline began.  When the area’s number one employer, the kodak factory, closed, that was the end of the areas manufacturing legacy.
Unlike the rest belt cities, Weston has the advantage of having the city of Toronto behind it. Metrolinx will open up a GO station in Weston, creating easy access to downtown. Since Weston used to be a separate town, it has great architecture in its housing stock at a reasonable price.  The city as a whole, has seen the affordability of houses decrease for the average Torontonian. And with the increase in population and the lack of low-rise houses being built in the city, there may be buyers heading to Weston to cash in on the cheaper home prices.
Weston has a long way to go though. The commercial strip is still pretty dismal, and some of the nearby high-rise rentals seem pretty rough around the edges. Still, crime here is decreasing, and the early buds of an emerging neighbourhood are appearing. Let’s hope Weston functions more like a Pittsburg or Chicago that can successfully rise from it’s industrial past and create some thing more diversified with a strong community, instead of a rustbelt city that can’t seem to stop their decline.