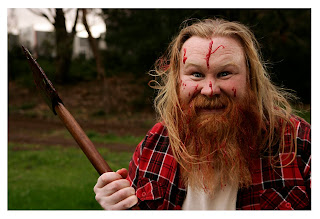 Stats can be a scary thing. Especially in real estate.  Words like “drop”, “decrease”, “plummet”, “bubble”, and “crash” can ignite the kind of anxiety a homeowner may feel if he or she were being chased by an axe murderer. And some times the fear should be taken very seriously, like in the case of being chased by an axe murderer. And other times, all you need to do is look at your fear straight in the eyes, and see that there is really nothing to be afraid of after all. Take the recent findings from CREA, the Canadian Real Estate Association. In their latest round of stats, they have found there has been a 16% decrease in home sales across Canada in February 2013 compared to February 2012. Now it is important to distinguish that this is not a drop in the price of homes. It is a different kind of decrease that refers to the number of sales that have taken place.

To illustrate this, think of the real estate market as a kind of see-saw. On one side you have sellers, and on the other you have buyers. When the market is unbalanced, you may have too many buyers on one side and not enough sellers on the other. This often leads to big jumps in the value of homes simply because there are  more buyers than there is product. And this often leads to bidding wars that can be very frustrating to buyers, and a joy for sellers. Then there is the opposite see-saw scenario, where there are move sellers than buyers.  Because of this, prices fall because there are more options for the buyers. And sellers sadly lower the price of their homes to attract the small pool of buyers.

A 16% drop in home sales, though, does not necessarily cause prices to fall or rise. In fact, there are fewer buyers and sellers on the see-saw. So there is no imbalance, just less weight on both sides. In fact, across Canada, prices have effectively flat-lined.

So the question becomes:  Why are there more people stepping to the sidelines than last year?
Well, part of that answer has to do with last year. If you close your eyes and transport yourself back to February 2012, you will likely remember a pleasant time when the sun was warm on your skin, and your snow shovel was ignored. In fact, winter in many parts of Canada barely existed last year. The Spring market starter much earlier in February. There is just some thing about the Spring, the rise of the tulips and buds on the trees that brings the buyers to the table. This year, in most of the country, winter just doesn’t seem to end. And when winter stays, the market is often off a slow start.

The other big reason there are fewer sales has to do with some thing a little more contrived than the weather. Between February 2012 and February 2013, the Federal government has  become much more involved in the Canadian real estate market with a plan to cool the market.  During the last year, they have tried to reign in the real estate market by making it tougher for first time buyers to receive a mortgage, effectively reducing the number of first time buyers. When the banks tried to lure the buyers back in with even better interest rates than we currently have, the government stepped in again and kindly asked them to refrain.

Then there’s Mark Carney, the recent head of the Bank of Canada, who went on a public campaign to let Canadians know they were taking on too much debt. And his public finger wagging worked. Canadians began to slowly decrease their rate of taking on more debt, like big mortgages.

So, with the government effectively trying to slow down sales and prevent the country from moving into bubble territory, they have, in part, cooled the market without crashing it.  They have reduced the number of buyers to more evenly match the number of sellers, leading to a more balanced market with fewer sales.

Now it would be nice if real estate could be so easily controlled. That’s not always the case. The crystal ball is pretty murky when it comes to predicting the future in real estate. At the end of the day, there is always a sense of the unknown when you buy or own real estate. That’s what’s exciting about taking a risk.

The key to any real estate purchase or sale is to really understand where you live.   A national average is not exactly exact when it comes to buying or selling property. A condo in Vancouver does not function the same way as a potato farm in PEI. Those are just different potatoes.  It’s like a class of say thirty students. They may have a 75% average in a certain test, but there will be students who perform better and worst than that average. Some who have improved over their last test and some that have not.
Markets function in very local, even hyper local ways. In Toronto, for example, houses in some neighbourhoods are still experiencing crazy bidding wars because of the low inventory and the demand of a given neighbourhood while some very large condos in other Toronto neighbourhoods are sitting on the market for weeks on end.
Still, it would appear, on average, that prices have not really risen or fallen, nationally speaking.   In some markets, first time buyers may actually have a little relief if prices increase at a slower rate, or even slip a little. Current homeowners may not see the same increases they have seen in the past decade, but they may take comfort that they have steered clear of a bubble, and will likely have modest increases to come in the long term.

All in all, a 16% decrease in sales may sound scary, but it doesn’t have to be. Prices have cooled off but have not crashed. Talk of a bubble has subsided (a little). Real estate prices are not on a tear.  In fact, in some ways, it’s just a well-earned rest for the real estate market.