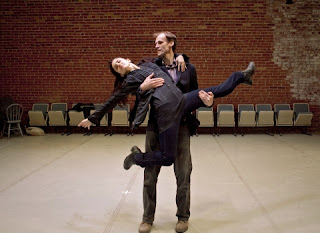 Regent Park. Outside of Toronto those words never meant much, but here in our city, it is often known as the dodgy neighbourhood that went very, very wrong for a very long time.

The funny thing is, Regent Park was initially a place of great optimism.  It was the first social housing project in Canada when construction began in the late 1940s. At the time, Canadians felt they were really making greats strides in taking care of those in need by building affordable housing, albeit kinda ugly housing too. Well,  even though the good intention was there, a ghetto formed in this area of the city over time.  It wasn’t all bad of course. Many new immigrants got their start here, and managed to form viable and strong community groups. But let’s face it, Regent Park ended up ghettoizing the poor in what became lousy, neglected housing. Businesses tanked, and drugs, crime and bad things moved in. The wackiest crack heads in wacky land felt right at home here.

As many know, a revitalization project began a few years ago where the old social housing of Regent Park would be knocked down. And out of that rubble, a new Regent Park would emerge with glass condos, a Sobeys, townhouses, and a community centre all combined in a mixed housing situation. This approach has worked well in places like the St. Lawrence Market area in Toronto where those who need social housing and those who buy a condo live in the same neighbourhood.

Right now, the project is only partially completed. There are 4 phases and phase 1 is done and 2 are well under way. And now you have completed condos that are fairly affordable, and very close to downtown. Sounds like a dream for condo buyers. But there is a hitch. You’re part of an experiment. Will this housing mix work? Though it has worked in other parts of Toronto, will it work here where the reputation of Regent Park tends to carry a pretty hefty stigma?

As some of you know from many of my rants, I find that a viable commercial strip where residents will use and visit make for a better community and better property values. For many years, I’d say Regent Park would have a hard time turning that commercial strip around, the one that runs along Parliament, south of Gerrard to Queen Street East.  But I’m beginning to see a few kernels of change. First, and most surprising, there is a new, sixty seat dance studio at Parliament and Dundas called The Citadel. This beautiful brick building used to be the Salvation Army Soup kitchen. Now, it’s some thing quite different thanks to the efforts of the husband and wife team behind the dance troupe Coleman Lemieux and Compagnie and a key investor from the Daniel Corporation (who brought us the new development of Regent Park, Part 2). Also, on a smaller scale, there’s the incredible success story of Sukho Thai, a Thai restaurant that doesn’t look like much, but has been wildly successful. So much so, that the owner were able to build a fancier location on Adelaide right downtown where you need two weeks to get a reservation.

Regent Park still has a long way to go. Oh does it have a long way to go. Most of the commercial strip is still quite desolate. Still, if you are an investor or a pioneer or you want to live close to downtown but you want to pay a lot of money, you may see a pretty good opportunity in front of you. Prices are still lower than average here. Once (and if) the commercial strip turns around and all four phases of the revitalization are complete, prices won’t stay low for long.