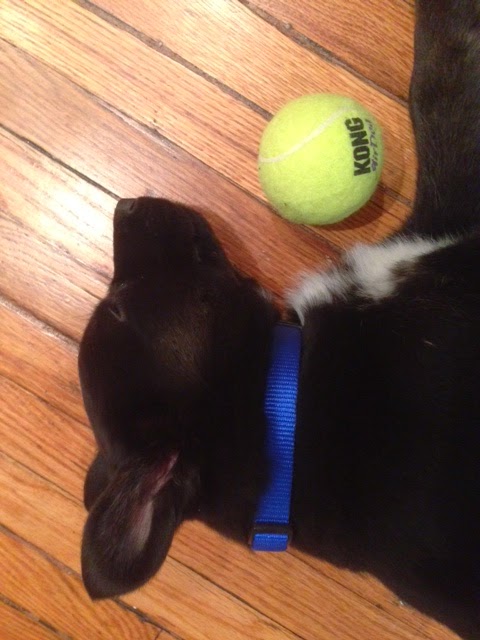 I just got a puppy. It’s a rescue puppy consisting of a mix of many breeds, a sweet girl who I am crazy in love with already.  When I went walking in my neighbourhood, I could not believe the number of people who I had never even seen before that would stop and chat with me. My new pup already loves just about any human, though she’s fairly indifferent so far to other dogs.
But today’s rant is not about the glory of owning a new canine, but how dogs affect the real estate market.  I know, this is the part where you roll your eyes and think “This is a bit of a stretch….” But bear with me. It really isn’t.
Even if you don’t like dogs or want one, the truth is, in a city like Toronto, you can spot an established or emerging neighbourhood by the  amenities that cater to dogs. Take, for example, a doggie day care or a doggie spa. Most of these indie businesses cater to neighbourhoods on the rise or ones that have arrived. It’s doesn’t mean that the more dog owners you have, the better your neighbourhood will be. That’s not the case. It does, however, speak to the kinds of things that people want in their neighbourhood: Namely, the independent, quirky businesses that makes their area distinct and self-sufficient.  Take Tailwaggers in the Junction. It’s part of many of the other indie businesses that have opened up there like The Beet, the Indie Ale House or Locomotive. All of these businesses are key to making the Junction an attractive place to live with a walkable main street. It’s the kind of place with an impressive walk score, and makes life outside of the house or condo much better. It’s easier to pick up fresh bread, an espresso, or drop one’s dog off for a little snippety snip of the nails and the fur. Even better, you don’t have to drive or take public transit to the businesses you need.
Then there are the dog parks. I know this is a place of war in many neighbourhoods. Those who use the parks like to have it nearby for their dogs. Those who live by the park have to listen to dogs all day. I don’t have a solution, but I can say that neighbourhoods that have dog parks often have a strong community. People chat with each other and the dark park becomes a community hub. People looking to buy here, even if they don’t have a dog, feel good about it. It shows that there is some interaction. Plus, strong communities push for things like a business improvement association, better attention to the parks, farmer’s markets, and well-used community centres.
Even if you live in a place with several low to high rise condo developments, you should still watch for the dogs. Many quality condos with no infrastructure or businesses previously in the neighbourhood, will put in designate parks dedicated to humans and their dogs. Of course, the best example of this recently is Cork Town with the incredibly awesome Corktown Common.
These days, no one wants to suffer the soul-crushing drive of the commute. The desire is not to live outside the city in a bigger house within driving distance to box stores you can find anywhere in North America. The push inside the boundaries of Toronto is to live local. People would rather walk to do their shopping that drive to it. This is why many of us love to live somewhere distinct whether it’s the Danforth Village, Roncesvalles, Leslieville, Old Mill, Liberty Village, Alderwood, the Junction Triangle, Weston or Oakwood.  All of these neighbourhood have their own flavour, but are not so tightly defined that they are rigid or inaccessible to someone who is new.
At the end of the day, if you are still looking for this kind of neighbourhood in which to live, then follow the dogs. Even if you find dogs noisy, smelly and annoying, they still are good for your hood. Look for doggies’ stores and the dog parks when you are looking for real estate, and you may end up with a great investment and a pleasant place to live.