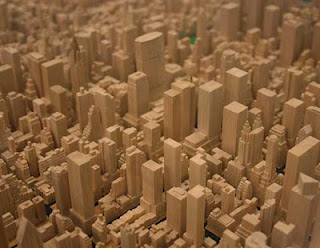 Have you noticed the term “Manhattanization” being thrown around a lot these days? Well I have, especially when it has to do with Toronto.  Not only in last week’s Huffington Post, but even in real life, when I’m out at a restaurant or overhearing idle chit chat in line at Loblaws. And for the most part, I think Torontonians like this term because it aligns them with New York. Ever since Peter Ustinov famously said that “Toronto is New York run by the Swiss”, we have had a fascination with being New York or at least we like the comparison.

But despite its New York sounding name, Manhattanization is not really about New York at all. The term itself actually has a pretty negative beginning. It was used to describe all the skyscrapers invading the San Francisco skyline, blocking the view to the bay in the 60s and 70s. It was no compliment.
Nowadays, it feels a little more positive. It’s like bragging about the skyline of your city, though the benefits of it depends whether you own property or not. Vancouver is actually a great example of Manhattanization. Like Manhattan, Vancouver’s downtown became landlocked with the help of the mountains and the ocean. Buildings became higher when there was not a lot less space left to expand out. In Toronto, it’s the green-belt policy that is causing this Manhattanization effect. You cannot build outside of the GTA on protected forests and farmland.
So now, there’s simply no denying it. Toronto really does have a full love-on for skyscrapers. In fact, for buildings over 100m, Toronto ranks 14th in the world for the number of high rises it has. That’s ahead of cities with five times the population like London and Mexico City. And a lot of these new skyscrapers are recent additions or still in the works. In fact the tallest condo in Toronto, the Ritz Carlton is a relatively new addition. And the second largest, Aura, is still under construction. In fact, out of the top 10 condos in terms of height, 9 out of the 10 Toronto condos have been constructed in the last two year or are still under construction. So there’s no doubt Toronto is quickly becoming much more of a vertical city, definitely compared to other same sized cities in the world. But what does this mean?
Well,  condo towers will continue to blossom, taking on a much bigger role than it does now. Some say the increase in the value of houses will rise 30 – 50% in the next decade making houses only accessible to the wealthy. So, that puts pressure on the condo market to pick up that middle class slack. As families are no longer able to afford a house, they will start looking to buy a condo instead. Interestingly, right now, bigger, family sized condos are the last to sell, but in the future, they may be much more in demand.  And since rental apartment buildings are rarely built these days, condos will have to take up the slack in that sector as well. So, love em or hate em, condos will continue to gobble up parking lots  and become a bigger portion of the homes available in the future.