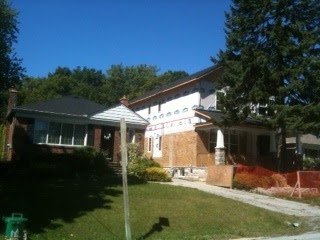 The bungalow. Some love em. Some hate em, but let’s face it, there are a lot of them in Toronto. They are a staple in many neighbourhoods.  Little ones, surprisingly spacious ones, dumpy ones and fancy ones.  In the post-war era in the 40s, 50s and 60s, they were all the rage. Most were designed as starter homes for soldiers back from the war, ready to start a family, or for workers who wanted to be near a neighbourhood factory or plant.

Nowadays, constructing a bungalow in Toronto would be one of the least cost-effective styles of home to build. In a city where condos rule supreme and builders want to maximize the space they have, it’s pretty hard for them to build a one story home on a huge lot when they can build a two story house, several row houses or a condo that will yield a much larger return on their investment.

Still, the resale bungalow has become a pretty prosperous property in this city.  East York (especially in the Danforth Village) and South Etobicoke (especially in Alderwood), are two neighbourhoods where bungalows are the primary housing stock. They are often smaller homes, though some of the Alderwood bungalows are quite large, and since they are often located a little further from the city core, they are the property of choice for first time buyers. But not first time buyers alone. Many senior and empty nesters, who are not crazy about condo living, will downsize to a manageable bungalow with no stairs to a second floor to climb.

Yes, bungalows are in demand, but some thing interesting is happening in these neighbourhoods where the deer and bungalows roams.  The bungalows are being purchased for their large lots size.  Typical two story lots are not wide at all in most of Toronto. Semis and row houses are the most common type of house averaging between 12 and 18 feet in width. The two stories are long and narrow. Bungalow lots are much larger, usually 25 ft to 30 ft wide or more to fit the elongated style of the house. A bungalow lot size could be enormous compared to most Toronto homes.

So, those first-time buyers and down-sizing seniors are now competing with builders and buyers with deeper pockets who either tear down the bungalow to build some thing larger, or “bump up” by adding another story on to the existing structure.

In neighbourhoods such as Alderwood, this phenomenon can really change the look and feel of a street.
On some streets, the bungalows have all but disappeared to be replaced by bigger homes with a price tag $200,000 to $300,000 more than before, depending on the new house.

Not every one is a big fan though.  Locals who live in Alderwood feel many of the bump ups and tear downs lead to a neighbourhood house that is too big, and does not fit in well with the rest of the neighhourhood. And is some cases, they are right, especially when the bungalow is torn down and replaced with a new home with a poor plan. Some tear downs lead to a new property that takes up a much larger portion of the plot, a giant compound pushing the borders of the lot lines and towering over the munchkin-like houses around it.

Still, as space becomes a premium, many see these  bungalow neighhourhoods as ideal places to design their dream home. In fact, these days the City is not shy about giving permits to bump up and add that second story. There are also architects and companies that specialize in modular homes that can help you to design and add a second floor.

Of course, buying a little scrappy bungalow and adding a floor may sound like a great idea, even as an investment, but the truth is, it should be a labour of love. Some builders and  homeowners can squeeze out a profit, but for the most part, the cost of adding the second floor or even starting over with a tear down does not necessarily mean you will make money on a sale.

Regardless, there is no stopping the bungalow transformation from happening around the city. There will always be those who love the bungalow just they way they are, but since they are on such large lots, many streets that were once the exclusive domain of the bungalow are on their way to becoming very different neighbourhoods.