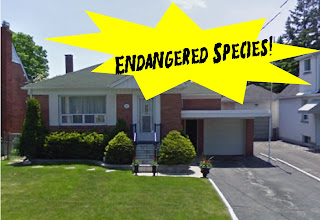 Something odd started happening in Toronto a few years ago. The condo market, and the market for houses divorced, and decided to go their own ways. It was an amicable split, but I’m not sure anyone would have guessed that the two styles of properties would not be together any longer.

Just before the breakup, the condo market levelled off, even dipped in price in a few places, whereas the houses have increased substantially in price each year. Where there has been a steady stream of new condos coming to market, there is a growing shortage of houses to be bought. Many buyers have been putting up their mitts for bidding wars in Toronto neighbourhoods where you’ll find increased competition in the housing sector.  With condos, there is often a little room for negotiation. They really are two different markets functioning in the same city. Weird, I know.

Both are a product of intensification policies that were put into place 10 years ago. The idea was to keep a portion of the GTA green. Essentially, we are no longer allowed to develop on the green belt and expand out to sprawl and unwisely gobble up all our farming land and natural surroundings. And really, who couldn’t get behind that? So, developers were encouraged to build higher instead of outward.

Because of this policy, there has been a lot of condos built in the last ten years. Visually speaking, Toronto  has changed dramatically. There have been very few houses or even low rise condos and town homes that have been built. And now, builders cannot keep up with the demand for lowrise housing acccording to the president of Realnet, George Carras.

Though there has been mounting pressure for the government to change its policy to make low rise housing more cost effective to build, the chances are, in my opinion, things will not change much. Even if they allow builders to build on the greenbelt, there is still a demand to live in the city. This is a trend all over the Western world, not just here in Toronto.

But what does the divorce of the housing and condo market mean?  Well, it means Toronto will be a different place in the future. So, I’m going to make some thought-out predictions of Toronto’s market in 20 years. Of course, no one can anticipate the twists and turns of a housing market based on the economy of the world or the demographic shifts to come. I’m certainly no Nostradamus.

Still, I can make a few educated guesses, based on intensification policies and my hunches as full-time real estate agent with a love of how real estate works in this city. And here’s are my thoughts:

1. Houses prices in the green belt will continue to soar. No surprise here. Lowrise homes will become a rare and valuable commodity. It will be very much like the current state of real estate in Vancouver where the average house cost $700,000 more than a condo. It means that houses will be a strong investment. There are fewer of them, and with a growing city, they will only be in greater demand for the years to come. It doesn’t necessarily mean that condos will tank in comparison, but some of them will always be a starting point for entry level first-time buyers and up.

2. Transit will finally grow. That’s right, I’m optimistic about transit! Currently, transit is a disaster in this city, and everyone knows it. Toronto has been dragging its heels for too long, and now everyone is waking up to this reality. It will become the number one issue of this city. Though there’s not much money for it, the Relief Subway Line will be built along with the Eglintion subway/light rail and the Scarborough subway. From a real estate point of view, it is often wise to invest near these new transit lines.

3. Snazzier Condos. Because land in the city will be harder to find for builders of the future, condo projects will be more daring with their designs for the precious land that is left. Some recent condo projects have had a lot more thought and design put into them than 20 years ago. That will continue. Greener buildings, more unique construction and a better fit for a given neighbourhood.  Let’s just hope the units don’t shrink any smaller than they already are!

4. Bungalows will be an endangered species. No builder in his or her right mind would build a bungalow now in Toronto. Lots with bungalows will be bought up for their size, and builders may just build huge houses or if the neighbourhood allows it, they will build three town homes where one bungalow once stood. And even if you are not ready to knock down your bungalow, you may consider a bump up where you add an extra floor. It’s happening all over the city right now from Alderwood in the west, to the Danforth Village in the east. That trend will keep on going. So long sweet bungalow!

Some of these predictions may be  obvious to some or fanciful to others, but consider what has changed in this city in 20 years. I’m sure very few future real estate thinkers of 20 years ago would have predicted that prices of houses would climb so high, They would likely not have guessed that our skyline would be completely transformed or certain neighbourhoods would rise from their derelict conditions to be centres of trendiness and community. I may not nail all my predictions, but I’m pretty sure the Toronto of 20 years from now will be a very different place.